This report describes the process of ingesting data about professional theatre companies in Switzerland.

The data source being used was the dataset "Professional Performing Arts Companies" (14 April 2017) provided by the Swiss Theatre Collection (STC).

The STS data set has its origins in a physical archive. Because of this the original dataset contained a lot of metadata which refers to holdings of the archive that is not relevant for Wikidata. Also, some of the data was not tidy and had to be cleaned up before it can be ingested. The data was analysed by the author. Figure one gives an overview of the original data set, and figure 2 contains the elements that can be ingested into Wikidata. 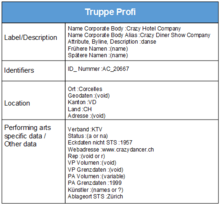 Class diagram that shows all the properties from the original STS dataset.

Class diagram that shows all the data that was actually used for the ingestion.

There are different reasons why certain data cannot be used in Wikidata: Some columns in the original data set were void or mostly void (Geodaten, Adresse, Verband); some had too many different or inconsistent values (Attribute, Byline, Description); and in one case data quality was regarded as insufficient for ingestion by the data provider (Verband).

During the analysis the following mapping was created:

A part of the data that was not tidy was already deleted in step one of this case study. Still there were inconsistencies to be found in the remaining data. The following examples show what sort of inconsistencies occurred in the data set:

In the column “Ort”, various combination of the examples shown in the table above were found and corrected. In most of the cases it was easy to interpret what was meant by the authors of the data set. However, figuring out every single case took quite some time. While the detection of the different classes of inconsistencies took a small amount of time, its correction was more time consuming. Certain patterns could be detected and corrected with the help of the OpenRefine Tool others had to be corrected manually. Eventually, it was decided to take the special cases (such as items with a second canton in the column canton) out into a separate file and treat them manually. By handling all the special cases in a separate file, it was possible to continue with the normal cases in a more more efficient manner because they were better usable for  tools such as OpenRefine or QuickStatements.

The unique identifier given by the STS could be used in Wikidata under the property inventory number, which acts as a general identifier for objects in a database. Most of the other columns in the STS dataset referred to data that was already existing in Wikidata. These columns were:

To allocate the entry to its corresponding Wikidata Q-number several steps were completed. First, the resources were retrieved from Wikidata using an appropriate SPARQL query. The query retrieves every object that is a Swiss municipality and additionally also shows its municipality code.

The retrieved data then was converted into a .CSV file and uploaded into OpenRefine. Finally it could be matched with the existing STS datafile using an OpenRefine command. Data concerning the municipalities was not tidy/unique enough, because the name of a certain municipality sometimes can be confused with other municipalities (e.g. Rüti b. Büren and Rüti ZH). Therefore, the reconcile-csv tool was used additionally, which provides a fuzzy-matching algorithm called dice (OpenKnowledgeLabs 2017). The result was the STC dataset with the corresponding Wikidata Q-numbers for all its entries except the item itself (in case of items being already present in Wikidata).

First a SPARQL Query was executed which retrieved every item that were instances of theatre troupes. However, the query just returned 40 results. Most of them were theatre troupes based in Russia or its predecessor states (i.e. Sovjet Union or Russian Empire) and none of them were Swiss troupes that matched with the STC data set. However, it was known to the author that there was an existing Wikidata item for the Swiss Comedy troupe Divertimento. The only statement it possessed was instance of "duo". While this statement is correct it does not actually describe the item's main character, which is theatre troupe. It turned out that several items from the STC dataset were already in Wikidata. They were discovered by using the following two approaches:

Doing so allowed to match at least some of the existing objects from Wikidata to the dataset, however, the method used does not guarantee that no double entries were created. This could have only been prevented by searching manually after every item from the STC dataset, which would be very time consuming.

[Note: This way of proceeding is questionable. Instead, a Wikidata item for the actual data set should be created and indicated as the data source -- Beat Estermann (talk) 11:01, 29 July 2017 (UTC)]

Most of the detected 29 existing Wikidata objects were poorly described, often with just one single statement. Sometimes there was just the label. However, there was hardly any erroneous data and it took only a small amount of time to correct it. The existing data was afterwards extended with further statements during step 8.

As in an earlier case study, the code for the QuickStatments Tool was created using the Microsoft MailMerge function. This time, however, QuickStatments V2 was used directly which resulted in a small change of syntax.

The ingestion was again done iteratively, with a small amount of items at first and a bigger amount in the subsequent steps so that errors could be handled progressively. As shown in the picture on the right hand side, QuickStatments V2 was unable to ingest items with the following statements:Object has an official name and the official name has an end time which has an unknown value. When adding a statement with end time in QuickStatements, it is mandatory to specify its exact time. While it is possible to add an official name with an end time of unknown value manually, this feature has not been implemented (yet) in QuickStatments V2.

Issues Related to the Ingest[edit]