This is the main documentation page for lexicographical data on Wikidata. 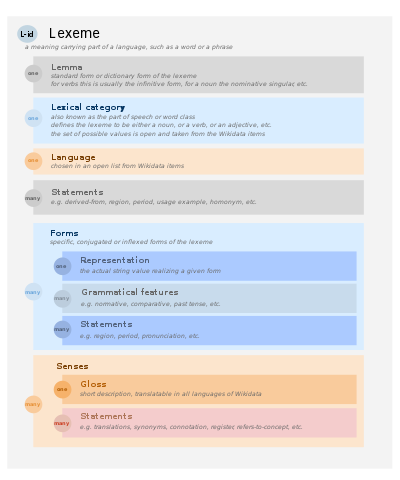 Visualization of the Lexeme data model

The data model of WikibaseLexeme describes the structure of the data that is handled as "Lexemes" in Wikibase. The text below is a summary; for more detailed information, see Extension:WikibaseLexeme/Data Model.

A Lexeme is a lexical element of a language, such as a word, a phrase, or a prefix (see Lexeme on Wikipedia). Lexemes are Entities in the sense of the Wikibase data model.

From a high level the Lexeme hierarchy is modeled like so:

A Lexeme is described using the following information:

This data model is further extended by the set of properties typically used for Lexeme statements, Form statements, and Sense statements. See Wikidata:Lexicographical data/Properties for an overview of these properties and Wikidata:Property proposal/Lexemes for current proposals of additional properties.

In some cases or languages, there may be multiple entities for related words, in others just one. The below table provides an overview how they may be linked:

For a given language and criterion (first column), just one of the two might apply

Screenshot of the Lexeme creation page

Screenshot of the top of a Lexeme page

Screenshot of the interface to edit a statement

Add, edit or delete statements of a Lexeme[edit]

Here's how you can look for Lexemes, Lemmas, Forms or Senses, via Special:Search or the search box on any page:

Note that the selector (drop-down menu popping up to suggest results) is not working yet. But if you press Enter or search after typing your keyword, you'll access the results.

For each Sense there can be many Sense statements made to not only other Senses, but also to Items through translations, synonyms, antonyms, connotations, register, evokes, usage examples, refers-to-concept, etc.

This is shown on the colored visualization of the Lexeme Data Model svg image above.

What is included in the first version[edit]

What will be added in the future[edit]

Ordered from near to long-term plans