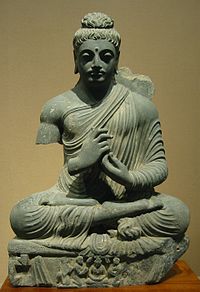 "That will do for now.." An eventualist sculpture, 19th century BW.

"There is no deadline."

Eventualism is a tendency amongst Wikipedians focusing on the eventual value of Wikipedia in the long-term rather than the immediate value. Contrast immediatism, the opposite viewpoint (see WP:NOW).

Historically, the eventualist perspective has been strong, as Wikipedia was of little current value, so its value in several years' time was of primary importance. As Wikipedia has grown in practical use, a more immediatist approach has won adherents. If Wikipedia ever approaches its target, the immediatist position may triumph, but for now there is still a tension between these differing schools of thought.

It is reasonable to suggest that the target can never be completely reached because by definition a perfect encyclopedia will move with the times (Latin: tempora mutantur). Some eventualists believe that Wikipedia is an ecology of ideas which breeds quality in the long term and so believe in trusting the process. Others believe that the nature of the wiki is such that any controls that immediatists think should be used to guarantee total quality are bound to be useless in practice and potentially harmful to the project.

In stark contrast to an exclusionist, an eventualist has no objection to large chunks of unwikified text and trusts that, eventually, someone will fix this, where an immediatist or exclusionist would be concerned that they will reduce the perceived professionalism of Wikipedia.

Eventualists follow inclusionism with respect to stubs and other low-quality articles, though they may well concur with deletionism with respect to articles being considered for deletion for reasons such as lack of importance. Unlike deletionists, eventualists would rather give an article on a notable topic a time to evolve and improve than delete it, and mark unsourced content as such rather than excluding it.

Eventualism is largely consistent with incrementalism, though the two have different reasons for their similar views. Whereas an eventualist believes that Wikipedia's worth increases with time and movement towards a never-reached completeness, an incrementalist believes that the same processes will inevitably lead to information once judged as non-notable becoming seen as more notable. As such, it is quite possible for a wikipedian to be both eventualist and incrementalist in their views.

There are three major types of eventualist:

Absolute eventualist
Avoids AfD and policy pages at all costs, and trusts that in the end, the community will treat articles appropriately, even if they don't make the right call the first time around (or sometimes even the second and third time).
Optimistic eventualist
Occasionally tries to intervene by commenting on AfD and policy pages, trying to speed up the process of reaching the right outcome, eventually.
Pessimistic eventualist
Believes that Wikipedia is eventually going to fail anyway, so doesn't bother to participate in any of it.

Beware the dangers of factionalism.

Compare with the Buddhist philosophy of impermanence (alternatively, "inconstancy"), and the Japanese aesthetic of wabi-sabi (finding beauty in the "imperfect, impermanent, and incomplete").

Eventualism can be used to justify almost any policy changes on the grounds that any harms it might cause will eventually not matter. For example, deletionists can argue that even if good content is deleted when it didn't need to be, someone will eventually get it right by creating from scratch a page that can survive AfD. Or if a banned user's useful contributions are removed, it won't matter because eventually someone will add the same content they added, using the same sources.[1] If we want to go to the extreme, we could argue that nothing we do is harmful because in the long run, we are all dead anyway, and the heat death of the universe will destroy Wikipedia no matter what we do.

Eventualism is closely related to the wiki way of making mistakes easy to correct rather than hard to make. The wiki way applies in both directions, though — a measure intended to be corrective should also be easy to reverse if it turns out to be a regression. But suppose, say, an article is deleted. If only a handful of users have access to that deleted content, it will be hard to restore. Thus, over a long period, a great deal of progress could be made toward improving an article, and yet if can be destroyed in one fell swoop, in such a way that it is difficult to reverse that deletion action, then deletionism may win over eventualism.