This is a controversial topic, which may be disputed.
Please read this talk page discussion before making substantial changes.

Deletionism is a term used to describe the minimalist idea that removal of material is a productive mode of editing, and that doing such regularly, primarily, or solely, rather than adding material, is sufficient to call oneself an editor. The main claim is that the wiki mode of editing is 'too quick', and that there are too many of them (contributors, of some nominal spectrum of skill), and that culling is therefore an art.

Conversely, Wikipedians who have beliefs ranging from less strict to no standards barring an article from Wikipedia are said to subscribe to inclusionism. Few editors would explicitly describe themselves as "deletionists", rather the term is often used in a derogatory manner, as self-deprecating humor, or simply used to expose contrast with people describing themselves as inclusionists.

Wikipedians who subscribe to a conservative inclusion philosophy are likely to request removal of an article they believe does not meet standards. Many editors' inclusion philosophies are dependent on the subject area. For example, some people have more expansive views about removing or deleting unsourced/poorly sourced biographies of living people from the Wikipedia project, because of the increased risk of harm these articles can represent.

The narrower viewpoint on inclusion does not usually insist that useful information should be deleted. Rather, the decision to keep or eliminate an article is viewed by many as tool for organizing the information that the project retains. Most often, people promoting the deletion of an article support moving the most important information from that article into a larger parent article on the subject and leaving a redirect to the relevant section.

On most articles in Wikipedia, there is little disagreement between editors of either persuasion. Most Wikipedians would agree that articles such as Dwight D. Eisenhower and Evolution have a clear place in the encyclopedia, just as many Wikipedians want extremely poor content to be excluded from Wikipedia. Disagreements usually arise, however, with relatively poorly written articles, or articles pertaining to a specialized subject, especially those whose subjects are fictional in nature (such as characters from a work of fiction) or narrow in scope.

For example, some editors may hold that a short, poorly sourced article on an elementary school in an obscure location does not merit a page of its own in the encyclopedia. They may cite concerns about adequate references and verification of claims made in the article. They are more likely to suggest that it is unnecessary to create individual articles on topics that are difficult or impossible to reliably expand in adherence to the verifiability and citation policies of the encyclopedia. Inclusionists often suggest that such articles be kept, especially if verifiability and adequate references are believed can be found. In this sense, inclusionism shares attributes of eventualism, whereas deletionism has similarities with immediatism and exclusionism.

Some argue that labeling positions as "deletionism" and "inclusionism" only leads to factionalism, which makes it difficult to foster cooperation and endangers the understanding of mutual positions. Instead of doing so, Wikipedians should try to develop meaningful policies in consensus which can be applied to resolve questionable cases. This can be done by building on existing policy, that is, by examining previous cases of deletions. Others argue that tensions can be reduced by recognizing this difference of tendency rather than denying it to create a false harmony, and instead setting policy and designing the software so that it allows the two tendencies to work with less conflict. And then there are those who consider it irrelevant whether there is an atmosphere of conflict or of co-operation, of tension or of harmony. They point out that Wikipedia is not a social club, and that the only important things here are the articles and the mechanisms that make their writing possible.

It is sometimes proposed that technological de-escalation such as output filtering could resolve the conflict completely, but deletion itself is simply output filtering: The mediawiki software never actually deletes anything. "Deletion" merely hides the content from public view. Proposals to add additional levels of deletion, e.g. logged in users only for content which is below the threshold which can be well maintained and referenced, have not gained any traction.

It is inaccurate to label Wikipedians simply deletionists or inclusionists: There is a range of views, and many Wikipedians judge articles on their individual merits, forming conclusions that may be ascribed to different "philosophies" by others. An individual's standards for keeping or dropping an article may require a two or three dimensional representation to be accurately described, instead of a one-dimensional continuum. For example, a Wikipedian may be quite happy to keep stubs, provided that they are on-topic, but desire to delete (or move) large but off-topic articles.

An essay written on English Wikipedia long ago and subsequently deleted by its author, but which eloquently reflects the tension here, states:

There are no deletionists.

But there definitely aren't deletionists. 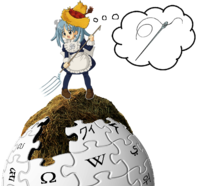 "Too many unnoteworthy or obscure articles impede finding the relevant subject, like trying to find a needle in a haystack."