From Wikipedia, the free encyclopedia
Jump to navigation Jump to search
River in Canterbury, New Zealand

The Waimakariri River is one of the largest rivers in Canterbury, on the eastern coast of New Zealand's South Island. It flows for 151 kilometres (94 mi) in a generally southeastward direction from the Southern Alps across the Canterbury Plains to the Pacific Ocean.

The river rises on the eastern flanks of the Southern Alps, eight kilometres southwest of Arthur's Pass. For much of its upper reaches, the river is braided, with wide shingle beds. As the river approaches the Canterbury Plains, it passes through a belt of mountains, and is forced into a narrow canyon (the Waimakariri Gorge), before reverting to its braided form for its passage across the plains. It enters the Pacific north of Christchurch, near the town of Kaiapoi.

Instead of being unoccupied Crown land as are most New Zealand river beds, the bed of the Waimakariri River is vested in the Canterbury Regional Council (Environment Canterbury).[1]

The name Waimakariri comes from the Māori words wai, meaning water, and makariri, meaning cold.[2] The river was briefly renamed as the Courtenay River in 1849 by the chief surveyor of the Canterbury Association, Joseph Thomas, in honour of Lord Courtenay. However, this name quickly fell into disuse in favour of the traditional Māori name.[3][4] The Waimakariri is colloquially referred to as the 'Waimak', a shortening of the Māori name.[5]

The source of the Waimakariri is located in the Southern Alps, at the head of a valley to the west of Arthur's Pass, where it is primarily fed by snow melt and glacial runoff. The river flows in a southerly direction, before turning east around the base of Mount Stewart. The river at this stage becomes braided, and is joined by the Bealey River as it flows across wide shingle beds.

As the river is joined by the Esk River, the Waimakariri river is forced into a narrow series of gorges and ceases being braided. This continues as the river flows through the foothills of the Southern Alps, and is used by the Midland Line railway as part of its traverse of the Southern Alps. The river exits the foothills at the Waimakariri Gorge, at which point it again expands to a braided system.

Once on the Canterbury Plains, the Waimakariri flows in a roughly east-south-easterly direction towards the Pacific Ocean. As with other braided river systems, the main channels frequently change within the primary riverbed, especially during periods of high flow rates. Geological evidence indicates that this mobility has extended to the river itself in the past, at times flowing through the current location of Christchurch into what is now the Avon Heathcote Estuary, and on a separate occasion flowing into Lake Ellesmere / Te Waihora, to the south of Banks Peninsula.[6] To protect Christchurch and other settlements near the river, multiple flood protections have been constructed either side of the river since European settlement, dating as early as the Canterbury Rivers Act 1868.[7]

The river currently reaches the Pacific Ocean just to the north of Christchurch, entering Pegasus Bay by way of Brooklands Lagoon. The Waimakariri marks one of only a few breaks in the roughly 50 km (31 mi) length of Pegasus Bay. Along with two other rivers which enter Pegasus Bay (Ashley River / Rakahuri and Waipara River), the Waimakariri is almost entirely responsible for the sediment which forms the bay and its coastal plain.[8]

Due to the size of the river, only a limited number of bridges cross the Waimakariri. From upstream to downstream, the current bridges are:

The Bealey Bridge is located immediately upstream from where the Bealey River flows into the Waimakariri. It is part of State Highway 73. Bealey Bridge is single-lane, with a passing bay in the middle. It is in a remote location and does not cater for pedestrians.[9]

Some 10 kilometres (6.2 mi) downstream from the Bealey Bridge, the Midland Line crosses the river. KiwiRail records this bridge as number 42 on its bridge asset list.[10] It is located where Red Beech Stream flows into the Waimakariri.[11]

The Mount White Bridge is, as the crow flies, located 2.7 kilometres (1.7 mi) downstream from the KiwiRail bridge. It is much older than the Bealey Bridge. The abutment on the left bank of the Waimakariri is located within the delta created by the Hawdon River.[12]

The Waimakariri Gorge Bridge is, as the crow flies, located 46 kilometres (29 mi) downstream from the Mount White bridge. This bridge was completed in 1877 and originally served both road and rail traffic (of the Oxford Branch). The bridge is on the register of Heritage New Zealand as a Category II structure.[13]

The SH1 Waimakariri Bridges are twin bridges connecting Christchurch with the region north of the Waimakariri River via State Highway 1. It is located 48 kilometres (30 mi) downstream from the Waimakariri Gorge Bridge. As part of the Christchurch Northern Motorway, each bridge was widened from two to three lanes during 2020, plus a cycleway added.[14]

Just 400 metres (1,300 ft) downstream from the state highway bridges is the Main North Road bridge, often referred to as the Old Waimakariri Bridge.[15] This two-lane traffic bridge does not cater for walking or cycling.[16]

All current bridges over the Waimakariri River

As one of the largest rivers on the Canterbury plains, the Waimakariri is an important habitat for wildlife, including many endangered species of plants and animals. The dry sections of riverbed are home to black-fronted terns, where braids in the river provide a natural barrier to predators.[17] The river and its tributaries are home to native species, including crayfish / kōura, New Zealand longfin eel, short-finned eel, lamprey and many species of invertebrates. The river is one of the few remaining habitats for the critically endangered Canterbury mudfish (kowaro), which previously inhabited wetlands across the Canterbury plains, while a portion of its riverbank is home to one of only two known remaining populations of Olearia adenocarpa.[17]

Introduced fish are common along the entirety of the Waimakariri River, making the river a popular location for fishing. As with most of New Zealand, this primarily includes brown and rainbow trout, as well as Chinook salmon (Oncorhynchus tshawytscha).[18] The salmon population dates to the early 1900s, when they were introduced from California, and results in large salmon runs near the river mouth in summer.[19]

View of river at Kowai Bush near Springfield, 1927

In 1923 the river was mainly investigated for a hydroelectric dam to supply electricity to Christchurch. It received support from the community but the dam was never built since the Government offered inexpensive electricity from the Lake Coleridge scheme.[20] 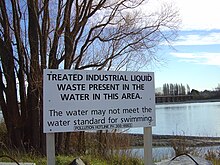 A water pollution sign on the lower reaches of the river

In 2007 the Waimakariri was ranked as one of the ten most polluted of the larger rivers in New Zealand.[22] Some of the pollution was caused by liquid wastes from industries such as a meat processing plant and wool scourers in the vicinity of the river. The wastes were discharged directly into it but as of 2012 it was piped to the municipal sewage treatment plant. There had been some non-compliance issues with the resource consents for water discharge.[23]