Departments of Electrical Engineering, Computer Science and Engineering and Telecommunications Engineering in the Linnanmaa campus.

Faculty of Humanities located at the northern end of the university building.

Old part of the Linnanmaa campus.

Oulu University Hospital buildings in Kontinkangas, Oulu, where the Faculty of Medicine is located. The heliport of the hospital in the foreground. 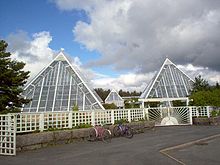 There are two campus areas:[5]

The University has a number of research units and shared locations. In Linnanmaa Campus there are:

The University of Oulu is divided into eight faculties:

The University of Oulu aims to promote mobility among its students. It takes part in a number of international exchange programmes, such as Erasmus Programme (Europe), Nordplus (Nordic Countries), FIRST (Russia), ISEP and International to International ISEP (USA, South America, Asia), UNC-EP (USA), north2north (USA, Canada, Russia, Nordic Countries), North-South-South (Africa). Besides, the University of Oulu has about 50 bilateral agreements with partner universities around the world.[7]

University works in 70 research areas.[8] There are five research focus areas which are coordinated by four focus institutes.[9]

About 60 invention disclosures are done yearly from the University of Oulu. The university has also served as a birthing place for over 60 research-based companies.[10] 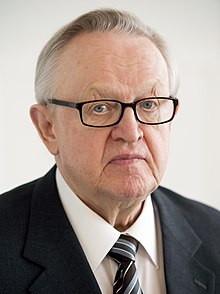 President Martti Ahtisaari, founder of CMI and recipient of the Nobel Peace Prize in 2008.

There are a number of students organizations or so-called student guilds[16] presented within the University. 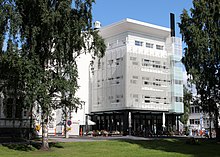 Student Housing Foundation of Northern Finland[17] (Finnish: Pohjois-Suomen opiskelija-asuntosäätiö; PSOAS) is the leading provider of student accommodation in Oulu. The organization operates on a foundation basis which ensures affordable rents for students. Following its mission, PSOAS offers housing services for people studying in Oulu as economically as possible. The residents of PSOAS houses in different areas around the city elect tenant committee for that area, which e.g. organises different activities, maintains club rooms and does other related issues, depending on the active members.[18]

The new international student house, named Aurora, was built next to PSOAS housing office in downtown Oulu. The building was finished during the spring of 2013. The house is supposed to be accommodated both by international degree students and Finnish students. The main purpose of the new building is to support the internationalization of Oulu and give the international students better access to Finnish culture and local people. The premises will also support these efforts: More space is dedicated for casual get-togethers, as there is a lounge space on every floor and a café of high level will be serving both Finnish and foreign customers on the ground floor.[19][20]

Oulu is considered a great place to study. The International Student Barometer 2019 ranked the University of Oulu first in the world when it comes to internet access and sixth in overall life satisfaction.[21]