From Wikipedia, the free encyclopedia
Jump to navigation Jump to search
For the community in Nevada County, see Sebastopol, Nevada County, California. For the city on the Crimean Peninsula, see Sevastopol.
City in California, United States

Sebastopol was once primarily a plum and apple-growing region. Today, wine grapes are the predominant agriculture crop, and nearly all lands once used for orchards are now vineyards. The creation of The Barlow, a $23.5 million strip mall on a floodplain at the edge of town, converting old agriculture warehouses into a trendy marketplace for fine dining, tasting rooms, and art, has made Sebastopol a popular Wine Country destination.[7]

Famous horticulturist Luther Burbank had gardens in this region. The city hosts an annual Apple Blossom Festival in April and is home to the Sebastopol Documentary Film Festival.

The area's first known inhabitants were the native Coast Miwok and Pomo peoples. The town currently sits atop multiple village sites.[8] The town of Sebastopol formed in the 1850s with a U.S. Post Office and as a small trade center for the farmers of the surrounding agricultural region. As California's population swelled after the westward migration[which?] and the California Gold Rush of 1848–1855, more and more settlers drifted into the fertile California valleys north of San Francisco to try their hand at farming.

There is some debate as to how the name "Sebastopol" came into use in Sonoma County. At one time, four other California towns were also named Sebastopol:

The town in Sonoma County originally had the name Pinegrove; the name change (according to rumor) had something to do with a bar fight in the late 1850s, which was compared by a bystander to the long British siege of the seaport of Sevastopol (1854–1855) during the Crimean War of 1853–1856.[9] The original name survives in the names of two downtown businesses: the Pinegrove consignment store and the Pinecone restaurant.

Sebastopol became known as the "Gravenstein Apple Capital of the World". The apple industry brought a steady rural prosperity to the town. In 1890 the San Francisco and North Pacific Railroad connected Sebastopol to the national rail network.[10] The town was incorporated in 1902, with schools, churches, hotels, canneries, mills, wineries, and an opera house to its credit. The 1906 earthquake reduced most of these early buildings to rubble (Sebastopol is only seven miles from the city of Santa Rosa, the worst-hit town in the 1906 earthquake), but as elsewhere in the county, the town was rebuilt.

In the second half of the 20th century, the apple industry struggled to compete with other apple-producing regions and gradually declined in economic significance. With greater personal mobility and the rise of larger shopping centers in other Sonoma County communities, many residents now often commute to work and shop in the neighboring towns of Rohnert Park or Santa Rosa, while Sebastopol maintains its small-town charm.[citation needed]

It is often incorrectly claimed[citation needed] that Sebastopol was the last town in Northern California to have working railroad trains on Main Street. The tracks were removed in the late 1980s. Passenger service had ceased in the 1930s, and regular freight service ended in the late 1970s. This was documented by Analy High School students in a 1979 video Our Train Down Main: a History of the Petaluma and Santa Rosa Railroad. The canneries and apple-processing plant are gone from downtown, and vineyards and housing developments have replaced many apple orchards, reducing the demand for freight service.

It is often also incorrectly stated[citation needed] that the tracks were removed in the 1990s when the downtown area was redesigned with two one-way streets to enhance traffic along Gravenstein Highway (Route 116). Main Street and Petaluma Avenue were actually designated one-way streets in 1985 in an attempt to deal with the town's perennial traffic problem. As of 2016[update] the old train station houses the Western County Museum. 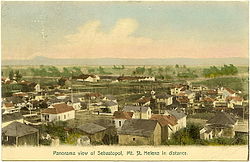 Sebastopol is situated on the edge of the Laguna de Santa Rosa, which is fed by Santa Rosa Creek and other tributaries, including three minor tributaries within the city limits – Zimpher Creek, Calder Creek and Witter Creek. The Laguna is a wetland area that is home to many species of wildlife and vegetation and divides the town from neighboring Santa Rosa. Nearly every winter the Laguna floods, cutting off State Route 12, and often flooding the low-lying businesses and homes on the eastern side of Sebastopol. The Pitkin Marsh lily and White sedge are two rare species of plants that are found in the vicinity of Sebastopol.

The Census reported that 98.3% of the population lived in households and 1.7% were institutionalized.

There were 3,250 households, out of which 31.8% included children under the age of 18 in the house, 41.5% were married couples living together, 14.2% were led by a female householder with no husband present, and 39.9% were other living arrangements. 31.8% of all households were made up of a single individual and 14.3% had someone living alone who was 65 years of age or older. The average household size was 2.33 and the average family size was 2.95.

For the most part the population is spread out across the age groups, although the young adult population is drastically lower than the other groups, indicating that most young people leave, at least temporarily. The reasons for this are probably a combination of the high cost of living and the lack of other young adults. The percent distribution on the 2000 census by age was as follows: 23.6% under the age of 18, 7.4% from 18 to 24, 25.0% from 25 to 44, 27.6% from 45 to 64, and 16.5% who were 65 years of age or older. The median age was 42 years.

Places of interest in Sebastopol include:

The city council consists of five members, each serving four-year terms. The city's laws are enforced by the Sebastopol Police Department. City council races are not partisan, so each member does not officially represent any party, however since 2000 there has been a decent amount of attention given to the individual party membership of city council members in Sebastopol. This happened because in 2000, with the election of Craig Litwin and Sam Spooner to the city council, the town had a Green Party majority—or would have, if city council races were partisan. This was only the second time this had ever happened in California, the first being the town of Arcata, California in 1996.

Sebastopol tends to support environmental policies: Earlier, in 1986, the residents approved an initiative declaring Sebastopol a "Nuclear Free Zone", The town does not use pesticides in city landscaping, and several years back, when the police needed a new vehicle, the city council voted to purchase a hybrid instead of a standard police car.

Current issues facing the city include a high cost of living and ongoing difficulties with traffic (the town has two highways going through downtown).

A former Mayor, Robert Jacob, who was selected by the city council in December 2013, was the owner of two medical marijuana dispensaries in Sonoma Count. He was reported to be the first American mayor to be involved in the industry.[20]

Sebastopol Charter, a K-8 public charter school, had the highest percentage (58%) of kindergarten students with medical exemptions to vaccines in California as of the summer of 2018.[24]