The Precision Time Protocol (PTP) is a protocol used to synchronize clocks throughout a computer network. On a local area network, it achieves clock accuracy in the sub-microsecond range, making it suitable for measurement and control systems.[1] PTP is currently employed to synchronize financial transactions, mobile phone tower transmissions, sub-sea acoustic arrays, and networks that require precise timing but lack access to satellite navigation signals.

The original version of PTP, IEEE 1588-2002, was published in 2002. IEEE 1588-2008, also known as PTP Version 2 is not backward compatible with the original 2002 version. IEEE 1588-2019 was published in November 2019 and includes backward-compatible improvements to the 2008 publication. IEEE 1588-2008 includes a profile concept defining PTP operating parameters and options. Several profiles have been defined for applications including telecommunications, electric power distribution and audiovisual. IEEE 802.1AS is an adaptation of PTP for use with Audio Video Bridging and Time-Sensitive Networking.

According to John Eidson, who led the IEEE 1588-2002 standardization effort, "IEEE 1588 is designed to fill a niche not well served by either of the two dominant protocols, NTP and GPS. IEEE 1588 is designed for local systems requiring accuracies beyond those attainable using NTP. It is also designed for applications that cannot bear the cost of a GPS receiver at each node, or for which GPS signals are inaccessible."[2]

PTP was originally defined in the IEEE 1588-2002 standard, officially entitled "Standard for a Precision Clock Synchronization Protocol for Networked Measurement and Control Systems" and published in 2002. In 2008, IEEE 1588-2008 was released as a revised standard; also known as PTP version 2 (PTPv2), it improves accuracy, precision and robustness but is not backward compatible with the original 2002 version.[3] IEEE 1588-2019 was published in November 2019,[4] is informally known as PTPv2.1 and includes backwards-compatible improvements to the 2008 publication.[5]

The IEEE 1588 standards describe a hierarchical master-slave architecture for clock distribution. Under this architecture, a time distribution system consists of one or more communication media (network segments), and one or more clocks. An ordinary clock is a device with a single network connection and is either the source of (master or leader) or destination for (slave or follower) a synchronization reference. A boundary clock has multiple network connections and can accurately synchronize one network segment to another. A synchronization master is selected for each of the network segments in the system. The root timing reference is called the grandmaster.[6] The grandmaster transmits synchronization information to the clocks residing on its network segment. The boundary clocks with a presence on that segment then relay accurate time to the other segments to which they are also connected.

A simplified PTP system frequently consists of ordinary clocks connected to a single network, and no boundary clocks are used. A grandmaster is elected and all other clocks synchronize directly to it.

IEEE 1588-2008 introduces a clock associated with network equipment used to convey PTP messages. The transparent clock modifies PTP messages as they pass through the device.[7] Timestamps in the messages are corrected for time spent traversing the network equipment. This scheme improves distribution accuracy by compensating for delivery variability across the network.

PTP typically uses the same epoch as Unix time (start of 1 January 1970).[a] While the Unix time is based on Coordinated Universal Time (UTC) and is subject to leap seconds, PTP is based on International Atomic Time (TAI). The PTP grandmaster communicates the current offset between UTC and TAI, so that UTC can be computed from the received PTP time.

Synchronization and management of a PTP system is achieved through the exchange of messages across the communications medium. To this end, PTP uses the following message types.

PTP messages may use the User Datagram Protocol over Internet Protocol (UDP/IP) for transport. IEEE 1588-2002 uses only IPv4 transports,[9]: Annex D  but this has been extended to include IPv6 in IEEE 1588-2008.[8]: Annex F  In IEEE 1588-2002, all PTP messages are sent using multicast messaging, while IEEE 1588-2008 introduced an option for devices to negotiate unicast transmission on a port-by-port basis.[8]: Clause 16.1  Multicast transmissions use IP multicast addressing, for which multicast group addresses are defined for IPv4 and IPv6 (see table).[8]: Annex D and E  Time-critical event messages (Sync, Delay_req, Pdelay_Req and Pdelay_Resp) are sent to port number 319. General messages (Announce, Follow_Up, Delay_Resp, Pdelay_Resp_Follow_Up, management and signaling) use port number 320.[8]: Clause 6.4

A domain[i] is an interacting set of clocks that synchronize to one another using PTP. Clocks are assigned to a domain by virtue of the contents of the Subdomain name (IEEE 1588-2002) or the domainNumber (IEEE 1588-2008) fields in PTP messages they receive or generate. Domains allow multiple clock distribution systems to share the same communications medium.

The best master clock (BMC) algorithm performs a distributed selection of the best candidate clock based on the following clock properties:

IEEE 1588-2008 uses a hierarchical selection algorithm based on the following properties, in the indicated order:[8]: Figure 27

IEEE 1588-2002 uses a selection algorithm based on similar properties.

Clock properties are advertised in IEEE 1588-2002 Sync messages and in IEEE 1588-2008 Announce messages. The current clock master transmits this information at regular interval. A clock which considers itself a better master clock will transmit this information in order to invoke a change of master clock. Once the current master recognises the better clock, the current master stops transmitting Sync messages and associated clock properties (Announce messages in the case of IEEE 1588-2008) and the better clock takes over as master.[10] The BMC algorithm only considers the self-declared quality of clocks and does not take network link quality into consideration.[11]

Through use of the BMC algorithm, PTP selects a master source of time for an IEEE 1588 domain and for each network segment in the domain.

Clocks determine the offset between themselves and their master.[12] Let the variable

represent physical time. For a given follower device, the offset

represents the time measured by the follower clock at physical time

represents the time measured by the master clock at physical time 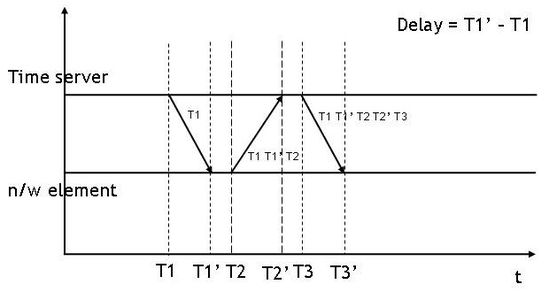 Each broadcast begins at time

with a Sync message sent by the master to all the clocks in the domain. A clock receiving this message takes note of the local time

when this message is received.

The master may subsequently send a multicast Follow_Up with accurate

. Masters with PTP capabilities built into their network hardware are able to present an accurate timestamp in the Sync message and do not need to send Follow_Up messages.

In order to accurately synchronize to their master, clocks must individually determine the network transit time of the Sync messages. The transit time is determined indirectly by measuring round-trip time from each clock to its master. The clocks initiate an exchange with their master designed to measure the transit time

. The exchange begins with a clock sending a Delay_Req message at time

to the master. The master receives and timestamps the Delay_Req at time

and responds with a Delay_Resp message. The master includes the timestamp

Through these exchanges a clock learns

is the transit time for the Sync message, and

is the constant offset between master and follower clocks, then

Combining the above two equations, we find that

The clock now knows the offset

during this transaction and can correct itself by this amount to bring it into agreement with their master.

IEEE 1588-2008 standard lists the following set of features that implementations may choose to support: