Gemini is an application-layer internet communication protocol for accessing remote documents, similarly to the Hypertext Transfer Protocol and Gopher. It is intended as a third alternative to those protocols. It comes with a special document format, commonly called "gemtext", that allows linking to other documents. Started by someone known as Solderpunk, the protocol is now being finalized collaboratively and has currently not been submitted to the IETF for standardization.

The Gemini specification defines both the Gemini protocol and a native file format for that protocol (analogous to HTML for HTTP or plaintext for Gopher), known as "gemtext". The design is inspired by Gopher, with certain modern additions such as mandatory use of Transport Layer Security (TLS) for connections and a hypertext format as native content type.

The design is deliberately not easily extensible, in order to preserve one of the project's stated goals of simplicity.[1]

Gemini is designed within the framework of the Internet protocol suite. Like HTTP(S), Gemini functions as a request–response protocol in the client–server computing model. A Gemini browser (analogous to a web browser), for example, may be the client and an application running on a computer hosting a Gemini site may be the server. The client sends a Gemini request message to the server, and the server sends back a response message. Gemini uses a separate connection to the same server for every resource request.

Gemini mandates the use of TLS with privacy-related features and trust on first use (TOFU) verification being strongly suggested.[2]

Gemini resources are identified and located on the network by Uniform Resource Locators (URLs), using the URI scheme gemini://. A Gemini request consists only of such a URL, terminated by CRLF; the header of a Gemini response consists of a two-digit status code, a space, and a "meta" field, also terminated by CRLF. If the server is successful in finding the requested file, the "meta" field is the MIME type of the returned file and after the header follows the file data.

Text in the gemtext format is line-oriented which simplifies rendering; it offers constructs for headlines (three levels), flat list items, pre-formatted text, and link lines – no inline emphasis. As with HTTP hypertext, URIs are encoded as hyperlinks in gemtext documents, so as to form interlinked hypertext documents in the Gemini "web", which users refer to as Geminispace.

"Geminispace" denotes the whole of the public resources that are published on the Internet by the Gemini community via the Gemini protocol. Thus, Gemini spans an alternative communication web, with hypertext documents that include hyperlinks to other resources that the user can easily access.[3]

As of September 2021,[update] Geminispace consists of around 1200 online known Gemini appearances ("capsules") identified by crawling over 270,000 URIs.[4]

The Gemini project was started in June 2019 by Solderpunk. Additional work has been done by an informal community of users. According to Solderpunk's FAQ, Gemini is not intended to replace Gopher or HTTP, but to co-exist with them.[3] 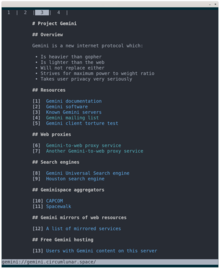 Due to the simplicity of the protocol and served media type, various Gemini browsers were implemented.[3][5] The following non-exhaustive list of clients highlights their diversity. Further lists are available online.

Command line clients are fairly popular due to Gemini's simple markup being easy to display in a text only format, whereas is can be quite limiting with web content.

Alternatively to native Gemini clients, Gemini-to-HTTP gateways can be used with common web browsers not supporting the Gemini protocol. Known such proxy servers are the Mozz.us portal, Vulpes Proxy, and ondollo.