From Wikipedia, the free encyclopedia
Jump to navigation Jump to search
Uralic language

Estonian belongs to the Finnic branch of the Uralic language family. The Finnic group also includes Finnish and a few minority languages spoken around the Baltic Sea and in Saint Petersburg and Karelian region in Russia. Alongside Finnish, Hungarian and Maltese, Estonian is one of the four official languages of European Union that is not of an Indo-European origin. Despite some overlaps in the vocabulary due to borrowings, in terms of their origin, Estonian and Finnish are not related to their nearest geographical neighbours, Swedish, Latvian, and Russian (which are all Indo-European languages), however they are related to the nearby minority Karelian and Livonian languages.

Although the Estonian and Germanic languages are of very different origins, one can identify many similar words in Estonian and German. This is primarily because the Estonian language has borrowed nearly one third of its vocabulary from Germanic languages, mainly from Low Saxon (Middle Low German) during the period of German rule, and High German (including Standard German). The percentage of Low Saxon and High German loanwords can be estimated at 22–25 percent, with Low Saxon making up about 15 percent. Swedish and Russian are two other sources of borrowings, but to a much lesser extent.[3]

Estonian is a predominantly agglutinative language, but unlike Finnish, it has lost vowel harmony, the front vowels occurring exclusively on the first or stressed syllable, although in older texts and in South Estonian dialects the vowel harmony can still be recognized. Furthermore, the loss of word-final sounds is extensive, and this has made its inflectional morphology markedly more fusional, especially with respect to noun and adjective inflection.[4] The transitional form from an agglutinating to a fusional language is a common feature of Estonian typologically over the course of history with the development of a rich morphological system.[5]

Word order is considerably more flexible than English, but the basic order is subject–verb–object. 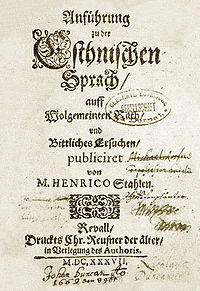 Estonian grammar published in Reval in 1637 by Heinrich Stahl

The oldest written records of the Finnic languages of Estonia date from the 13th century. Originates Livoniae in the Chronicle of Henry of Livonia contains Estonian place names, words and fragments of sentences.

The earliest extant samples of connected (north) Estonian are the so-called Kullamaa prayers dating from 1524 and 1528.[7] In 1525 the first book published in the Estonian language was printed. The book was a Lutheran manuscript, which never reached the reader and was destroyed immediately after publication.

The first extant Estonian book is a bilingual German-Estonian translation of the Lutheran catechism by S. Wanradt and J. Koell dating to 1535, during the Protestant Reformation period. An Estonian grammar book to be used by priests was printed in German in 1637.[8] The New Testament was translated into southern Estonian in 1686 (northern Estonian, 1715). The two languages were united based on northern Estonian by Anton thor Helle.

Writings in Estonian became more significant in the 19th century during the Estophile Enlightenment Period (1750–1840).

The birth of native Estonian literature was in 1810 to 1820 when the patriotic and philosophical poems by Kristjan Jaak Peterson were published. Peterson, who was the first student at the then German-language University of Dorpat to acknowledge his Estonian origin, is commonly regarded as a herald of Estonian national literature and considered the founder of modern Estonian poetry. His birthday, March 14, is celebrated in Estonia as Mother Tongue Day.[9] A fragment from Peterson's poem "Kuu" expresses the claim reestablishing the birthright of the Estonian language:

Can the language of this land
In the wind of incantation
Rising up to the heavens
Not seek for eternity?

In modern times Jaan Kross,[10] Jaan Kaplinski[11] and Viivi Luik are three of Estonia's best known and most translated writers.

Writings in Estonian became significant only in the 19th century with the spread of the ideas of the Age of Enlightenment, during the Estophile Enlightenment Period (1750–1840). Although Baltic Germans at large regarded the future of Estonians as being a fusion with themselves, the Estophile educated class admired the ancient culture of the Estonians and their era of freedom before the conquests by Danes and Germans in the 13th century.[12]

After the Estonian War of Independence in 1919, the Estonian language became the state language of the newly independent country. In 1945, 97.3% of Estonia considered itself ethnic Estonian[6] and spoke the language.

When Estonia was invaded and occupied by the Soviet Union in World War II, the status of the Estonian language changed to the first of two official languages (Russian being the other one).[13] As with Latvia many immigrants entered Estonia under Soviet encouragement.[6] In the second half of the 1970s, the pressure of bilingualism (for Estonians) intensified, resulting in widespread knowledge of Russian throughout the country. The Russian language was termed as ‘the language of friendship of nations’ and was taught to Estonian children, sometimes as early as in kindergarten. Although teaching Estonian to non-Estonians in schools was compulsory, in practice learning the language was often considered unnecessary.[6]

During the Perestroika era, The Law on the Status of the Estonian Language was adopted in January 1989. The 1991 collapse of the Soviet Union led to the restoration of the Republic of Estonia's independence. Estonian went back to being the only state language in Estonia which in practice meant that use of Estonian was promoted while the use of Russian was discouraged.[14]

The return of Soviet immigrants to their countries of origin has brought the proportion of Estonians in Estonia back above 70%. And again as in Latvia, today many of the remnant non-Estonians in Estonia have adopted the Estonian language; about 40% at the 2000 census.[6] 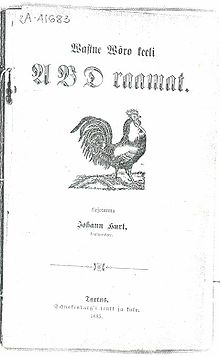 The Estonian dialects[15][16] are divided into two groups – the northern and southern dialects, historically associated with the cities of Tallinn in the north and Tartu in the south, in addition to a distinct kirderanniku dialect, Northeastern coastal Estonian.

The northern group consists of the keskmurre or central dialect that is also the basis for the standard language, the läänemurre or western dialect, roughly corresponding to Lääne County and Pärnu County, the saarte murre (islands' dialect) of Saaremaa, Hiiumaa, Muhu and Kihnu, and the idamurre or eastern dialect on the northwestern shore of Lake Peipus.

South Estonian consists of the Tartu, Mulgi, Võro and Seto varieties. These are sometimes considered either variants of South Estonian or separate languages altogether.[17] Also, Seto and Võro distinguish themselves from each other less by language and more by their culture and their respective Christian confession.[6][18]

Estonian employs the Latin script as the basis for its alphabet, which adds the letters ä, ö, ü, and õ, plus the later additions š and ž. The letters c, q, w, x and y are limited to proper names of foreign origin, and f, z, š, and ž appear in loanwords and foreign names only. Ö and Ü are pronounced similarly to their equivalents in Swedish and German. Unlike in standard German but like Swedish (when followed by 'r') and Finnish, Ä is pronounced [æ], as in English mat. The vowels Ä, Ö and Ü are clearly separate phonemes and inherent in Estonian, although the letter shapes come from German. The letter õ denotes /ɤ/, unrounded /o/, or a close-mid back unrounded vowel. It is almost identical to the Bulgarian ъ /ɤ̞/ and the Vietnamese ơ, and is also used to transcribe the Russian ы.

Although the Estonian orthography is generally guided by phonemic principles, with each grapheme corresponding to one phoneme, there are some historical and morphological deviations from this: for example preservation of the morpheme in declension of the word (writing b, g, d in places where p, k, t is pronounced) and in the use of 'i' and 'j'.[clarification needed] Where it is very impractical or impossible to type š and ž, they are substituted with sh and zh in some written texts, although this is considered incorrect. Otherwise, the h in sh represents a voiceless glottal fricative, as in Pasha (pas-ha); this also applies to some foreign names.

There are 9 vowels and 36 diphthongs, 28 of which are native to Estonian.[1] All nine vowels can appear as the first component of a diphthong, but only /ɑ e i o u/ occur as the second component. A vowel characteristic of Estonian is the unrounded back vowel /ɤ/, which may be close-mid back, close back, or close-mid central.

Typologically, Estonian represents a transitional form from an agglutinating language to a fusional language. The canonical word order is SVO (subject–verb–object).[citation needed]

In Estonian, nouns and pronouns do not have grammatical gender, but nouns and adjectives decline in fourteen cases: nominative, genitive, partitive, illative, inessive, elative, allative, adessive, ablative, translative, terminative, essive, abessive, and comitative, with the case and number of the adjective always agreeing with that of the noun (except in the terminative, essive, abessive and comitative, where there is agreement only for the number, the adjective being in the genitive form). Thus the illative for kollane maja ("a yellow house") is kollasesse majja ("into a yellow house"), but the terminative is kollase majani ("as far as a yellow house"). With respect to the Proto-Finnic language, elision has occurred; thus, the actual case marker may be absent, but the stem is changed, cf. maja – majja and the Ostrobothnia dialect of Finnish maja – majahan.

The verbal system lacks a distinctive future tense[20] (the present tense serves here) and features special forms to express an action performed by an undetermined subject (the "impersonal").

Although the Estonian and Germanic languages are of very different origins and the vocabulary is considered quite different from that of the Indo-European family,[5] one can identify many similar words in Estonian and English, for example. This is primarily because the Estonian language has borrowed nearly one third of its vocabulary from Germanic languages, mainly from Low Saxon (Middle Low German) during the period of German rule, and High German (including standard German). The percentage of Low Saxon and High German loanwords can be estimated at 22–25 percent, with Low Saxon making up about 15 percent.[21]

Estonian language planners such as Ado Grenzstein (a journalist active in Estonia in the 1870s–90s) tried to use formation ex nihilo, Urschöpfung;[22] i.e. they created new words out of nothing.

The most famous reformer of Estonian, Johannes Aavik (1880–1973), used creations ex nihilo (cf. ‘free constructions’, Tauli 1977), along with other sources of lexical enrichment such as derivations, compositions and loanwords (often from Finnish; cf. Saareste and Raun 1965: 76). In Aavik's dictionary (1921), which lists approximately 4000 words, there are many words which were (allegedly) created ex nihilo, many of which are in common use today. Examples are

Many of the coinages that have been considered (often by Aavik himself) as words concocted ex nihilo could well have been influenced by foreign lexical items, for example words from Russian, German, French, Finnish, English and Swedish. Aavik had a broad classical education and knew Ancient Greek, Latin and French. Consider roim ‘crime’ versus English crime or taunima ‘to condemn, disapprove’ versus Finnish tuomita ‘to condemn, to judge’ (these Aavikisms appear in Aavik's 1921 dictionary). These words might be better regarded as a peculiar manifestation of morpho-phonemic adaptation of a foreign lexical item.[23]

Article 1 of the Universal Declaration of Human Rights in Estonian: