Colognian or Kölsch (Colognian pronunciation: [ˈkœlʃ]; natively Kölsch Platt) is a small set of very closely related dialects, or variants, of the Ripuarian group of dialects of the Central German group of languages. These dialects are spoken in the area covered by the Archdiocese and former Electorate of Cologne reaching from Neuss in the north to just south of Bonn, west to Düren and east to Olpe in northwest Germany.

Kölsch is one of the very few city dialects in Germany. Another city dialect is the one spoken in Berlin.

In the Ripuarian dialects, "kölsch" is an adjective meaning "from Cologne" or "pertaining to Cologne", thus equivalent to "Colognian". Its nominalized forms (ene Kölsche, de Kölsche etc.) denote the inhabitants of Cologne. The word "Kölsch", without an article, refers to either the dialect or the local Kölsch beer. Hence the humorous Colognian saying: "Ours is the only language you can drink!"[1]

In Cologne, it is actively spoken by about 250,000 people, roughly one quarter of the population. Almost all speakers are also fluent in standard or high German. It is widely understood in a region inhabited by some 10 million people (a conservative estimate).

There is a community of people who speak a variety of Kölsch in Dane County, Wisconsin, United States.[2]

There are local (decreasingly divergent) variants of Kölsch in the Quarters, most notably those only recently incorporated into the city, and the Hinterland.[clarification needed] Sometimes, also the far more than 100 clearly distinct Ripuarian languages of Belgium, the Netherlands, and German Rhineland are incorrectly referred to as Kölsch, as well as the Rhinelandic regiolect. In fact, the regiolect is very different from Kölsch, being the regional variety of Standard German influenced only to a certain degree by the dialect. As such, many native speakers of the regiolect are in fact unaware of the fact that a “regiolect” exists, believing they speak plain Standard German.[citation needed]

In its modern form it is of comparatively recent origin. It developed from Historic Colognian, but has been under the influence of New High German since the 17th century. It was also influenced by French during the occupation of Cologne under Napoleon Bonaparte from 1794 to 1815, and therefore contains some more words from and expressions pertaining to French than does Standard German. There are also phonological similarities with French, which however may be coincidental.

Kölsch is one of the variants of the Ripuarian dialects (part of the Rhinelandic or rheinisch dialects – as opposed to the regiolect), which belong to the West Franconian family, itself a variant of West Middle German. It is closely related to the lower Rhineland (niederrheinisch) and Moselle Franconian (moselfränkisch) dialects and combines some features of them, as well employing a variety of words hardly in use elsewhere. Common with the Limburgish language group and other Ripuarian languages, it has a phonemic pitch accent, referred to as the 'singing' Rhinelandic tone.

Features in comparison to Standard German[edit]

This list shows only the most important differences. Most of these are not uniquely Kölsch, but true for all Ripuarian dialects. 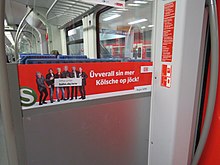 Colognian dialect on a sign on an S-Bahn train. Translation: Everywhere, we Cologners are on the move!

In comparison to most other German dialects, Kölsch is unusually well documented through the work of the Akademie för uns Kölsche Sproch and scholars such as Adam Wrede [de], whose publications include a dictionary, a grammar and a variety of phrase books. While Kölsch is not commonly taught in schools (although there are often extracurricular offerings) and a lot of young people do not have a proper command of it, many theaters exist that perform exclusively in Kölsch, most notably the Volkstheater Millowitsch, named after the late Willy Millowitsch (1909–1999) and the famous puppet theater, Hänneschen-Theater. There has also recently been an increase in literature written in this dialect and both traditional music and rock in Kölsch are very popular in and beyond Cologne, especially around Carnival, including bands such as Brings, The piano has been drinking... [de], Bläck Fööss, Höhner and others. The Kölsch rock group BAP is even among the most successful rock bands in Germany. Another noticeable phenomenon is the usage of either a watered-down Kölsch dialect or the Rhinelandic regiolect by German TV personalities, especially comedians such as Gabi Köster [de] and others.

The Lord's Prayer in Kölsch[edit]

Nota bene: This is not a literal, but an artistic rendition of the Lord's Prayer.

Nota bene: This is not a literal, but an artistic rendition of the Lord's Prayer.

Dear Lord God, holy is Your Name.
From the heavens You rule all the universe
according to Your will.
Like a father you care for humanity,
which awaits Your Kingdom here on Earth.
There is much need in the world, and thus we pray:
Make it so that no person should have to
suffer hunger anymore.
Take from us our debts,
so that every one of us is merciful to
his own debtors.
Help us to withstand all temptation,
and keep everything that could harm our
eternal salvation.