From Wikipedia, the free encyclopedia
Jump to navigation Jump to search
Not to be confused with Bali language (disambiguation) or Pali.
Malayo-Polynesian language spoken on the island of Bali 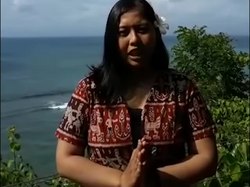 Balinese is a Malayo-Polynesian language spoken by 3.3 million people (as of 2000[update]) on the Indonesian island of Bali as well as Northern Nusa Penida, Western Lombok, Eastern Java,[2] Southern Sumatra, and Sulawesi.[3] Most Balinese speakers also know Indonesian. The Bali Cultural Agency estimated in 2011 that the number of people still using the Balinese language in their daily lives on the Bali Island is under 1 million. The language has been classified as "not endangered" by Glottolog.[4]

The higher registers of the language borrow extensively from Javanese: an old form of classical Javanese, Kawi, is used in Bali as a religious and ceremonial language.

Balinese is an Austronesian language belonging to the Malayo-Polynesian branch of the family. Within Malayo-Polynesian, it is part of the Bali–Sasak–Sumbawa subgroup.[5] Internally, Balinese has three distinct varieties; Highland Bali, Lowland Bali and Nusa Penida.[4]

According to the 2000 census, Balinese language is being spoken by 3.3 million people in Indonesia, mainly concentrated on the island of Bali and the surrounding areas.

Depending on dialect, the phoneme /t/ is realized as a voiceless alveolar or retroflex stop. This is in contrast with most other languages in western Indonesia (including Standard Indonesian), which have a dental /t/ patterning with an otherwise alveolar phoneme series.[3]

Stress falls on the last syllable.[7]

Even though most of the basic vocabulary in Balinese and Indonesian are of Austronesian and Sanskrit origin, many cognates in both languages sound quite different.[8]

Balinese has different registers depending on the relationship and status of those speaking: low (basa ketah), middle (basa madia), and high (basa singgih). Basa singgih contains many loanwords from Sanskrit and Javanese.

Balinese has a decimal numeral system, but this is complicated by numerous words for intermediate quantities such as 45, 175, and 1600.

Balinese has been written in two different writing systems: the Balinese script, and in modern times the Latin script.

The Balinese script (Aksara Bali, ᬅᬓ᭄ᬱᬭᬩᬮᬶ), which is arranged as Hanacaraka (ᬳᬦᬘᬭᬓ), is an abugida, ultimately derived from the Brāhmī script of India. The earliest known inscriptions date from the 9th century AD.[9]