Alvão Natural Park (Portuguese: Parque Natural do Alvão) is a protected area founded in 1983, and located in the municipalities of Mondim de Basto and Vila Real, in the Tâmega and Douro Subregions of northern Portugal. Although the smallest of Portugal's natural parks, it extends through 72.2 square kilometres (27.9 sq mi) of mountainous land, populated by approximately 700 locals.[3]

In order to support the conservation of nature, a resolution of the Council of Ministers (142/97), dated 28 August 1997, integrated Alvão into a broader area of classification under terms of the European Union's Natura 2000 designation: Sítio Alvão-Marão como (Sítio TCON0003 – Alvão-Marão).[5] Under this arrangement community directives, such as those for bird species (79/409/CEE, 2 April) and habitats (92/43/CEE, 21 May) were included within the framework, in order to contribute to the conservation of habitats and their respective species of flora and fauna considered under threat within the European Union.[5]

View of the mountain range

The park is located in the Trás-os-Montes and Alto Douro provinces, in the district Vila Real, divided between the municipalities of Vila Real (parishes of Borbela, Lamas de Olo and Vila Marim) and Mondim de Basto (parishes of Ermelo [pt] and Bilhó), occupying an area of 7220 hectares or 72.2 square kilometres (27.9 sq mi).[4]

The highest peak in natural park is Caravelas, 1,339 metres (4,393 ft) above sea level, and the lowest point is Lousa along the Rio Olo, roughly 260 metres (850 ft) above sea level. There is an altitudinal range of 1,079 metres (3,540 ft), and the park is divided into two zones: an elevated area along the Rio Olo watershed that mostly corresponds to the parish of Lamas de Olo, and a lower area that includes Ribeira de Fervença and the Olo watershed in the parish of Ermelo. The transition between the two is marked by a sudden drop associated with the Fisgas waterfall.

Fisgas de Ermelo, one of the waterfalls of the park 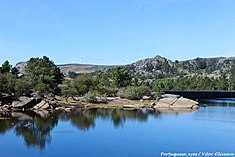 View from the Cimeira dam

Much like a great part of the Transmontana region, PNAL is situated within the Maciço Antigo (Ancient Massif), within the Galiza-Trás-os-Montes subregion, a geomorphological unit of igneous and metamorphic rock formed by Hercynotype movements orienting the first groups along a northeast to southwest axis.[6] Accompanying these movements were great expansions of granitic magma and prolonged secondary erosion, resulting in sedimentary cliffs and unaccented mountain ranges.[6] A tertiary phase, in the raised areas, resulted in fractures in the dominant northeast-southwest axis, resulting in a variation in relief caused by different rock resistance.[6]

The area is characterized by a dichotomous geological region, between schist and granite rock types.[6][7]

The park has a temperate Atlantic climate with Mediterranean characteristics.[9] The headlands of the Olo River are influenced by maritime air masses that rise over park's eastern boundary.[9] This results in heavy precipitation during the winter months. These months are cold and rainy, with frequent snow showers in the high altitudes, while in the summer it is dry and warm. Most rain occurs in the colder months, while during the dry periods there is little rainfall, or concentrated in one month.[10] The variation in slope allows for a diverse microclimate, with different vegetation between high and low altitudes.[9] The combination of microclimatic conditions and rainfall has resulted in a lush landscape.[10] 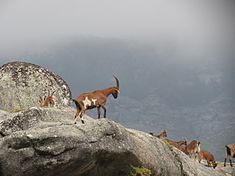 Mountain goats scrambling along rocky hilltops within the park

Oak trees dominate the major elevated areas, especially along the banks of the river, along with species of Common hazel (Corylus avellana), holly (Ilex aquifolium), chestnut, and laurel, forming mixed forests that include rare plants such as Sundew (Drosera rotundifolia), a species of carnivorous plant found in the moist lands along the riverfront.[11]

The Olo River is rich in trout and is populated by the Eurasian otter (Lutra lutra).[11]

Among reptiles in the area are the Iberian emerald lizard (Lacerta schreiberi) and the Latastei viper (Vipera latastei).[11]

An abandoned watermill along the waterway of Alvão

The traditional architecture of the region is a distinct mountain style, especially in Ermelo and Lamas de Olo, influenced by the sociological and artesanal nature of the landscape, or in Fervença, influenced by agrarian necessity along a terraced landscape.[11]