From Wikipedia, the free encyclopedia
Jump to navigation Jump to search
Latin phrase signifying a solution meant to address one specific problem or task
This article is about the Latin phrase. For other uses, see Ad hoc (disambiguation).

Ad hoc is a Latin phrase meaning literally 'to this'. In English, it typically signifies a solution for a specific purpose, problem, or task rather than a generalized solution adaptable to collateral instances. (Compare with a priori.)

Common examples are ad hoc committees and commissions created at the national or international level for a specific task. In other fields the term could refer to, for example, a military unit created under special circumstances (see task force), a tailor-made suit, a handcrafted network protocol (e.g., ad hoc network), a temporary banding together of geographically-linked franchise locations (of a given national brand) to issue advertising coupons, or a purpose-specific equation.

Ad hoc can also be an adjective describing the temporary, provisional, or improvised methods to deal with a particular problem, the tendency of which has given rise to the noun adhocism.[1]

Style guides disagree on whether Latin phrases like ad hoc should be italicized. The trend is not to use italics.[2] For example, The Chicago Manual of Style recommends that familiar Latin phrases that are listed in the Webster's Dictionary, including "ad hoc", not be italicized.[3][4]

In science and philosophy, ad hoc means the addition of extraneous hypotheses to a theory to save it from being falsified. Ad hoc hypotheses compensate for anomalies not anticipated by the theory in its unmodified form.

Scientists are often skeptical of scientific theories that rely on frequent, unsupported adjustments to sustain them. Ad hoc hypotheses are often characteristic of pseudo-scientific subjects such as homeopathy.[5] 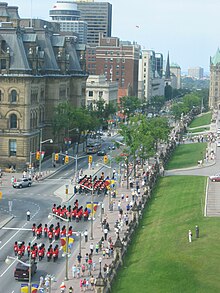 The Ceremonial Guard parading in Ottawa. The CG is an ad hoc unit of the Canadian Forces.

In the military, ad hoc units are created during unpredictable situations, when the cooperation between different units is suddenly needed for fast action, or from remnants of previous units which have been overrun or otherwise whittled down.

In national and sub-national governance, ad hoc bodies may be established to deal with specific problems not easily accommodated by the current structure of governance or to address multi-faceted issues spanning several areas of governance. In the UK and other commonwealth countries, ad hoc Royal Commissions [6]may be set up to address specific questions as directed by parliament.

The term ad hoc networking typically refers to a system of network elements that combine to form a network requiring little or no planning.